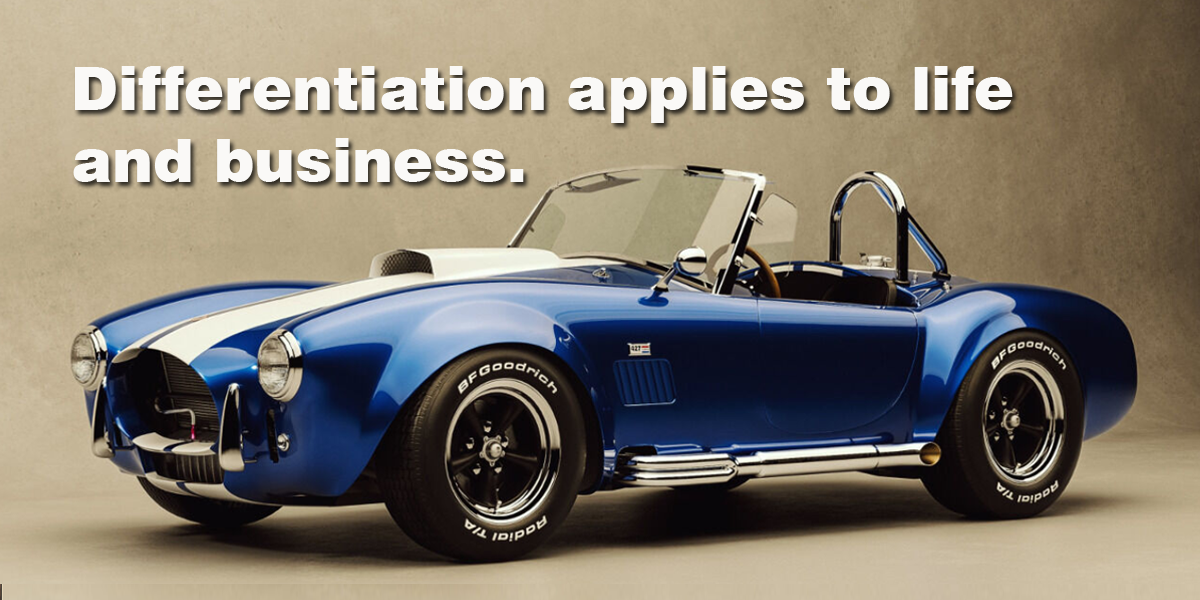 The basic principle of differentiation applies to all categories of life and business.

As a young man, my first goal after getting a decent job was to save and buy the car of my dreams, a 1968 Mustang Fastback, Boss 302. To say that baby was fast is true understatement, but not fast enough for me. So, I went to see my uncle Art who worked as the service manager at a high-end imported car sales and service dealer. Those were exciting times for me. I would visit him while he was at work on Saturdays. Once he finished working on a car, I would join him in the test drive and often got to actually drive some truly exotic cars. I drove one of the first BMWs in the country—they were simple boxy-shaped things back then. Ferrari, Lotus, Bentley, Rolls, Aston Martin, MG, Porsche; you name the car—I got to drive it.

So, I wanted, and I wanted…

But back to my Mustang. In order to give me more speed, my uncle added a four-barrel carburetor and a few other tricky things that improved that rocket on fire for me (after I bugged him enough for what I wanted). Now this was the fast-back model and it looked fantastic. But not fantastic enough for me (typical of an impulsive young guy). So I wanted to place really wide tires in the rear for better looks and more traction which I needed since I already had success shutting down Corvettes on The Boulevard (an extremely wide street behind the high school near my house).

I did get my way despite my uncle’s advice and warning that putting tires that wide on the car would create another set of problems. You guessed it, that’s exactly what happened. The tires were so wide they would scrape badly against the fenders on any bump. My choices were to either remove the tires (no way), or install a lift kit to raise the rear which of course not only solved the tire scraping problem but the Mustang looked really “jacked” that way: high rear end, deep reversed rims and super wide tires. Dual exhaust, and the sound; oh, the sound… okay, it’s a guy thing.

In doing the tire thing I had obviously disregarded my uncle’s warning, and the following expense required heavy duty shocks. This continued a few more times and I was going into hock on the cost of upgrades which I really didn’t need. The car needed nothing except to be driven, When I told my uncle I was thinking of having the car repainted in what could only be called, “Arrest-Me-Red.” He was not very happy with me, so I headed home. Winter arrived and the snow came. I lived with my folks at the time.

A large open yard behind the house provided parking for our cars. There, my new Mustangsat out in the open with snow falling on it. Around 2 a.m. in the morning I woke with a jolt. I couldn’t take the thought that my shiny new Mustang sat by itself getting loaded with snow, so I proceeded to go out and wipe the snow off as it fell. My father woke up and coming into the kitchen saw the door partially open. He walked out on the back porch and looking down saw his crazy son trying to fight off a snowstorm to protect his car. 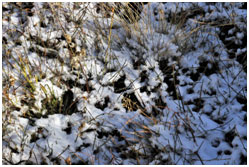 Needless to say, his reaction wasn’t quiet. Regardless of my father’s rants, I went out every hour and carefully brushed the snow off my car. By morning the sun showed up and there was a snow coting on the ground and shrubs, but my Mustang was clean! Fortunately, we didn’t get much snow that winter and spring finally showed up. With that I started right back on changing that Mustang. I visited my uncle to discuss more upgrades. He listened and nodded saying he would get back to me.

He phoned that afternoon to say he would be stopping bythe house to show me something really important. I thought, he’s got an upgrade idea for my car. Not quite. I knew he had arrived because the sound of a Ferrari is quite unmistakable. This baby was a1966 Ferrari 275 GBT. I ran at warp speed down the stairs. He parked the Ferrari right behind my Mustang by the curb. Totally enraptured I stared at it, in a trance-like state, it moved fast just standing still. Even the reflections and shadows across the paint were fast.

“Take a good look at it,” my uncle blurted out, “go ahead, walk all around it…look at the lines and the styling.”  Oh, I did just that.  “Be sure to really get a close look at this vehicle…study it. Now walk around your Mustang and look it over,” he said. I was puzzled by that instruction, but I did it.

“It will never be a Ferrari. Got it?”

I stood there with my mouth open as he jumped back in the Ferrari, fired it up and drove away leaving at least 30 feet of rubber on the street. His lesson landed in my brain effectively. I tried to make the Mustang into something it wasn’t. And frankly, it didn’t need to change since that car came already hot right and unique, off the dealer showroom floor. Most young guys would have given a right arm to have that car. I could have enjoyed the excellence of what I had, a beautifully designed, ultra-fast Mustang!

Keep in mind small businesses already have something, a product, a service, a body of knowledge…something that makes them distinctive and unique. Unfortunately, they never uncover it or convey it.

When the economy works, it’s because small business works!

This is a true marketing problem in most small and midsize companies. Those two factors alone hold back the quality level of sales that a company needs to growth profitably. Look at it this way, and if you do, you will create a profitable business.

If you have a business that should stand out, don’t let it blend in with all the others in the marketplace.Stand out and convey your uniqueness because what makes you different is what make you money.

Al is an internationally awarded creative director, writer, author and marketing consultant. He writes on a variety of subjects including business, marketing and sales.